Let us introduce ourselves, by sharing you our company history. If you have any questions or share the same passion about Tequila, please don’t hesitate to contact us. We love to get in touch! 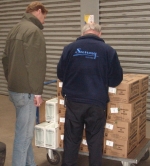 Tequila Unlimited was officially founded in the Netherlands on July 7, 2007 by a guy who grew up in the heart of Texas where he enjoyed (some say too many) good tequilas with friends. When he moved to The Netherlands to pursue his MBA, he wanted to offer his good friends in Holland high quality tequila! The problem was that he could only find the usual mixto tequila on the market and was actually appalled that his Dutch friends considered tequila as a “get drunk quick” spirit rather than one to be sipped, savored and enjoyed.

Purely out of necessity, he ordered a few bottles of various 100% agave tequilas from the US. He drank a few with friends, but also gave a few bottles to local bars and restaurants. As the word spread, people started asking for more bottles, and some restaurants started to order 100% agave tequila. A few cases grew into half a pallet, and then into a full pallet every once in a while.

Around 2005, a good friend of his founded the famous Dos Lunas tequila brand in El Paso, Texas, and was asked to look into the potential of the Dos Lunas brand in the European market. After months of careful research, he had to report back that the market potential in the EU would not meet the Dos Lunas expectations. The general consumer was still drinking the “cheap stuff” and the stigma tequila was still prevalent.

During this research, he gathered a lot of market information and a good understanding of the spirits market and distribution in the EU. He met potential distributors to ask their view (and of course interest) in quality 100% agave tequilas, but they confirmed what he had already learned, 100% agave tequila was still a niche market that would be very difficult to crack. However, some of these distributors agreed help and list a few brands in the future.

On top of this, some of his informal customers were calling and asking for more tequila, but more importantly, some new ones were becoming interested as well. This presented a slight problem; importing spirits is a specialized business which must adhere to many rules, regulations and tax obligations.

Against better judgment, after studying all the options, risks and future potential, the Texan formerly founded and registered the Tequila Unlimited B.V. (LLC equivalent in the US, or Sociedades de Responsabilidad Limitada in Mexico) company on July 7, 2007 using a small loan from a family member.

From its founding, the clear strategy of Tequila Unlimited was to primarily import 100% agave tequila from Mexican distilleries still owned by Mexicans who take pride and joy in distilling their tequila. These Mexican distilleries often pass on the knowledge of Tequila from one generation to the next, and they certainly don’t cut corners. They would not dare as these distilleries offer their tequila to their family and friends! Tequila Unlimited is therefore assured of only top quality tequilas!

The geographic distribution and logistics of Tequila Unlimited has also expanded. From the first “international” sale to Belgium in 2008, Tequila Unlimited is now supplying tequila to customers in most of the EU and well beyond from bonded warehouses in Amsterdam, London and Barcelona.